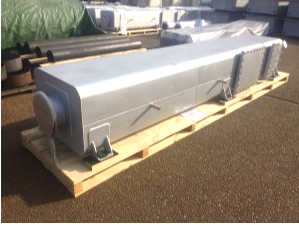 IMS designed and supplied six SCR systems for an overseas client in 2017.

Soot particles were not to be increased as a resut of using the SCR Technology.

Following commissioning of each system the Nox levels were reduced by an average of around -90% across all 6 systems, whereas the CO and HC was reduced by a factor of around -76%.

The photograph below shows one of the SCR Reactors with built in silencing and spark arresting capabilities designed for the client.

The external  mixing pipes (not shown) was manufactured in Stainless Steel grade.

The SCR catalytic elements were square in section and came with a control panel with a programmable controller and a wide array of sensors including pressure, temperature, NOx and Back Pressure sensors.

The combined SCR + Silencer/Spark Arrestor was designed to replace the existing silencer on the Cummins VTA28-G5 engine on the standby generators.

Details of the Cummins VTA28-G5 Engines:

The recommendation was to use no more than 50ppm ULSD Fuels to minimise any increase in particulates.

Opacity measurements were taken following installation and it was found that there was no significant difference in the PM measurements mainly due to switching to the ULSD.

To reduce the CO (Carbon Monoxides) and HC (Hydrocarbons) to the permitted levels shown above Diesel Oxidation Catalysts (DOCs) were installed prior to the SCR Catalysts.

Since supplying this type of system IMS have switched to using round substrates in a modular construction all in parallel which reduces the overall backpressure across the system.

This unit also had an external AdBlue Mixing Pipe which increases the length of the system. IMS now wherever possible uses an embedded mixer pipe with the reactor.

Also, the reactor used an air assisted AdBlue Injector which required a compressor to deliver the AdBlue and keep the injector cool.

Today, IMS uses an airless AdBlue injection system where the injector is cooled by recirculating the AdBlue across the injector.

We also now use both “Engine Out” and “Tailpipe” NOx Sensors (rather than a single NOx sensor on the outlet) as part of a closed loop system which continually monitors NOx reductions across the SCR Catalysts.

The complete system was designed and delivered by IMS but installed by a local partner based in Egypt.