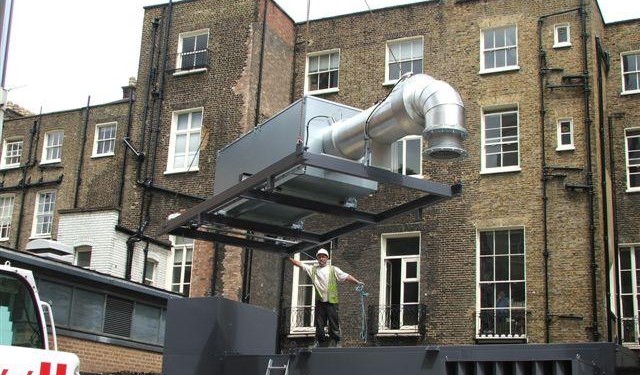 IMS were awarded a contract in 2016 for the Design, Manufacture and Supply of an SCR Reactor combined with an acoustic housing suitable of reducing NOx emissions in the order of -80% while achieving noise levels of no more that 75dB(A) at 1mtr.

The photograph below shows the SCR Reactor with built in silencing being lifted to the roof area on a skid at University College London to be installed on top of the existing generator canopy. 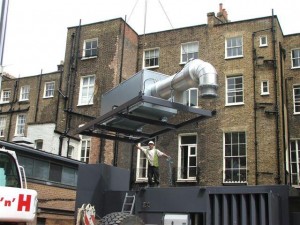 The combined SCR + Silencer was to replace the existing silencer on the MTU 16V2000-G3 engine on the standby generator.

The existing silencer was removed from the generator canopy roof and replaced by the combined SCR pus silencer.

The recommendation was to use no more than 50ppm ULSD Fuels to minimise any increase in particulates.

There was no stated requirement for the reductions in particulate, although it was not expected that we would increase PM as a result of introducing the SCR Technology.

Opacity measurements were taken following installation and it was found that there was no significant difference in the PM measurements mainly due to switching to the ULSD.

The SCR system was designed to provide a reduction of a minimum of at least -85%, however when commissioned the actual NOx emissions were shown to be around 350mg/m3N @ 5% O2 which equates to a 90% reduction in NOx.

An AdBlue Tank of approximately 120 Ltr capacity was supplied together with transfer pipework which was suitable for a run-time of approximately 30 hrs at full load. Due to space restrictions a larger tank could not be installed, and the urea supplier had to guarantee to top up within 24 hours.

The SCR Substrates used were rectangular in shape fitted in a number of banks in series. Since supplying this type of system IMS have switched to using round substrates in a modular construction all in parallel which reduces the overall backpressure across the system.

This unit also had an external AdBlue Mixing Pipe which increases the length of the system. IMS now wherever possible uses an embedded mixer pipe with the reactor.

Also, the reactor used an air assisted AdBlue Injector which required a compressor to deliver the AdBlue and keep the injector cool.

Today, IMS uses an airless AdBlue injection system where the injector is cooled by recirculating the AdBlue across the injector.

We also now use both “Engine Out” and “Tailpipe” NOx Sensors (rather than a single NOx sensor on the outlet) as part of a closed loop system which continually monitors NOx reductions across the SCR Catalysts.

The complete system was delivered, installed and commissioned by IMS.